Why is karaoke so popular around here [Philippines]? I can't sleep at night without hearing sintunado [out of tune] singing and it's starting to be a little annoying.

When I saw the word "karaoke" in your question, the first words that came to my mind were:

Sorry, I couldn't help it!  As if on cue, the music by The Foundations just flooded my brain.  You're lucky actually -- if we were face to face, you'd have seen me dance and snap my fingers to the tune too!

So yes -- I feel for you.  It would be torture for anyone to see and hear someone like me sing (and dance!) to karaoke non-stop, which I'm capable of doing!  Honestly, I just hope you're not the type who goes postal and murderous just because someone is belting Frank Sinatra's My Way -- truly a disturbing and bizarre trend.

But why do Filipinos love to sing karaoke?

The easy, short, obvious and very much correct answer is: Because we love music.

But there's an even better explanation: Because we actually invented karaoke singing.  Literally.

While the Japanese are the ones credited for coining the term "karaoke" (from "kara" meaning empty and "ōkesutora" meaning orchestra), it was actually a Filipino, Roberto del Rosario, a gifted musician and music teacher, who developed in 1975 (and later patented) an advanced sing-along-system known as OMB (one-man-band) which was the combination of a music player, voice taping mechanism, tuner and mixer -- a sing-along-system (SAS) which allowed his students to sing with the recorded music using a microphone and an amplified speaker.

I must point out though that there are disputes as to who really invented karaoke.  One version says it is actually Daisuke Inoue who invented karaoke in 1971 even if he failed to patent it.

But I don't completely buy it.  Here's why:


Tracing the history of Filipino workers through the centuries in Japan, Prof. Lydia N. Yu-Jose of Ateneo de Manila noted that "[w]hile most [of the original] Filipino migrant workers in the United States were plantation laborers, most of the workers in Japan...were musicians."  Their earliest recorded presence was in 1886, but the entry of Filipinos in Japan became more regular in the 1920s and onwards, mostly as members of "real" American jazz bands.  After World War II, their presence only increased, initially due to the fact that American managers and promoters were recruiting them to perform in American bases in Okinawa.  But then, Prof. Yu-Jose noted, these same recruited Filipinos would later find themselves performing in fashionable night clubs of Tokyo, outside the oversight of course of their American overlords.
Needing to improvise, Filipinos came up with low-tech but clever solutions that would generate greater revenue for them at a cost lower than having a full-scale musical band (like the American-owned and American-managed ones from which they started).  These improvisations eventually led to the development of 'minus-one music' - a sing-along musical accompaniment recorded on cassette tapes which also became prevalent in the Philippines from the late 1960s to the early 1980s.
In other words, even assuming for the sake of argument that Daisuke -- who did not patent his invention -- did indeed beat del Rosario -- who patented his (leading to his later being awarded a Gold Medal for Best Inventor in 1985 by the United Nations World Intellectual Property Association) -- to the "race," one can legitimately argue that Filipinos, collectively as hired musicians in Japan, were actually the ones who really came up with the first beginnings of the karaoke system.
In any case, back to your question.
You said it's getting to be annoying, so I came up with a matrix which you can distribute to your family, friends, and officemates, and/or post in karaoke parlors to help guide people on the proper etiquette for karaoke singing: 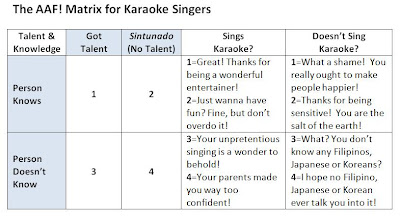 Personally, I'm a 2: I'm kinda sintunado and I know it for a fact.  But I sing karaoke because I really just wanna have fun.  The tricky part for me, of course, is not knowing whether I'm overdoing it or not.  That's where my true friends come in, who always forcibly yank away the microphone from me.

Anyway, if we chance to meet each other one day at a karaoke parlor and you want to strangle me already about my karaoke singing, will you please wait until you hear my dear friend sing ABBA's "Dancing Queen." ;-)

Got a question for The Filipino?  Email him now at askthepinoy@gmail.com.
Posted by The Filipino at 8:33 AM

Email ThisBlogThis!Share to TwitterShare to FacebookShare to Pinterest
Labels: Music

thanks for answering my question! :)). when you mentioned singing build me up i suddenly remembered me singing spice girls as a kid. too embarrassing, really.

i liked the chart you made. everything you wrote there was so true. that's exactly what goes through my mind whenever i pass by someone doing karaoke.

@Anonymous: How do I know you're really Chloe? ;-)

Anyway, if you are indeed Chloe, you're welcome and hope to see more of you around. Sorry it took a little while to answer your question.

Nice to know about Filipinos being the innovators of karaoke! Makes me feel good. :)

@Trosp:
Thanks for sharing that piece on FB.

@Leiza:
Visited your singsnap rendition! It's a cool service -- looks fun. Not sure yet but I might open an account too! ;-)

Oh Yeah Filiponos love to sing, if Koreans do drink alcohol like water, Chinese really will eat anything, the Japanese are all-around freaks.. then filipinos can spend all day long to have karaoke for fun... Seriously, it’s like Filipinos are born with a musical gene.

OK, so we understand why Filipinos love to sing videoke. But why must some always sing it at full volume until very late at night with no regards to people living nearby with children trying to sleep, workers trying to sleep for early shifts the next day, but someone is screaming out videoke at 4am and disturbing everyone?? No respect for neighbors? I see it everywhere. All are full volume.

Posting a sign isn't going to do the job. Filipinos LOVE tearing down signs, or peeing on them (Bawal Umihi Dito signs especially). Calling the police does the job and that's what we do. Here's the problem in the Philippines. There's no discipline. Filipinos hate giving discipline and they hate receiving discipline. This country is full of people who avoid confrontation at all cost and pout for weeks on end if they are told off. Even when we call the police they try to avoid the issue and tell us to call the Barangay. And guess what? The Barangay is run by uneducated idiots and are usually the ones singing karaoke. Luckily we are a business and our tax dollars that pays their salary is a bit more important than some drunk squatter's feelings so the police get over their fear of discipline and get them to turn it off.

Why Filipinos love to sing? Simply, they really love music. Once they sing, they feel they are part of the song or they relate in every line of the lyrics so even they are out of tune - it's fine, as long "may puso". This is maybe one reason why karaoke machine in the Philippines is famous.