Teenage boys in the Philippines are so fond of playing the online game DOTA [Defense of the Ancients]. Some even got addicted.

Here's my question: If you were a teenage boy, who would you choose: GF [girlfriend] or DOTA? Why?

Does your L stand for Lost-to-DOTA too?  Is this the underlying reason behind your question?

If so, I feel for you.  I really do.  But this also means you don't really care about what I would choose if I were a teenager again, right?  In fact, I think you're really just looking for some validation that what happened to you or someone you know who's close to you is a fairly common occurrence nowadays among GFs.

And if this makes you feel better -- guess what? -- I have news for you: You're not alone because from what I have gathered, the state of romance among the young right now is really dismal.  No, make it abysmal.  Actually -- no -- the right adjective is more like funereal!

I'm not pretending nor kidding.  It's true: Long forum threads and online chatter on the topic by a legion of teenage GFs, ignored or dumped outright because of DOTA, are filled with rancor and resentment despite a veneer of calm.  And songs of melancholia are also aplenty on YouTube because of it.

And what about the boys -- what do they do?  Do they at least feel repentant?  Regretful?  Remorseful?

Heck, no!  They instead put out banners comparing the two -- GF vs. DOTA -- with an ending that cannot be mistaken for anything other than a vicious, pernicious, hideous laugh.  See the below: 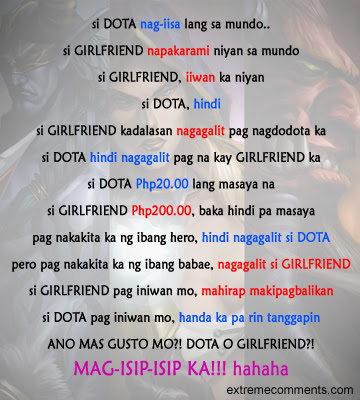 [English Translation: DOTA is one of a kind in the world; there's plenty of GF material. GF will leave you, DOTA will not. GF gets angry when you do DOTA; DOTA doesn't get angry when you're with GF.  DOTA is happy with 20 pesos [low maintenance]; GF is unhappy with 200 pesos [high maintenance].  If you find another hero, DOTA does not get angry; if you find another girl, GF gets angry. If you leave GF, it's hard to return to her; if you leave DOTA, it's still ready to accept you.  Who do you prefer?! DOTA or GF?! Think hard!!! Hahaha.]
Did you see the "hahaha"?

Now, I don't really believe in multo, but our ancient romantic forebears must be rolling in their graves right now and getting ready to go on the offense because of this -- this Defense of the Ancients thingy!

And by the way, are these pretenders now members of some conspiracy -- maybe a secret society or something?  What's up with this so-called Oath of Allegiance to DOTA, their Panatang Maka DOTA?
﻿﻿
[English Translation: Oath of Allegiance to DOTA: I love DOTA.  I was born to play DOTA.  This is the game I will pass on to my next generation.  She cares for and helps my hero to be strong, courageous and useful.  In return, I will butcher my opposing heroes.  I will serve the base I chose.  I will defend my base even if it's mega creeps.  I will not press F10 even if we're about to lose.  I will strive to be a true DOTA lover in thoughts, in words and in deeds. Oh, DOTA first.  hehehe. ]

Now did you see the "hehehe" this time?  How vile, don't you think?

And yet you say they're just "fond of playing the online game"!  Fond?  Even afer Internet cafes had already been turned into ponds by Typhoon Ondoy and they were still playing, still inseparable from their computer stations, you still just call them fond of it?
﻿ ﻿
﻿﻿What's wrong with you, girlfriend?!?

Let me tell you exactly what: It's your fault.  Yes, you Filipino teenage girls -- so-called mga mayuyuming kayumangging kaligatan ng bayan, the demure browns of town.
Why?  Because anecdotal reports have reached me saying that many of you gals in the Philippines have changed!  You've watched way too many reality shows on TV and you're probably thinking whatever is on those shows ought to be the new reality now, too!
So, yes, you're at fault because you said YES to teenage boys who probably never even bothered learning the kundiman and the harana to court you.  (And besides, you were not even supposed to have BFs yet,* just BFFs at most and definitely without benefits!)
And you gals probably did not even employ the age-old Filipina art of the pagpapakipot.
In other words, you probably were too easy!  Too undemanding!

In other words, you probably did not challenge the boys enough!

And most importantly, unlike the game dynamics in DOTA, you gals probably did not even put up any defenses whatsoever.  Instead, you just allowed the boys to roam free with their key to the passageway which held The Ancient Secret -- the secret which caused men of yore to do battle in Troy.

In other words -- and here you have to forgive my being too upfront and too conjectural -- you probably did not even require, well, a Trojan!

And this is the problem -- the big problem:  Because we all know many teenage boys, who saw the same reality shows on TV you did, just seek the pleasure of the conquest now.  And then they want to tally the score, and then "level up," and then brag about it to friends.

So here's the deal: If you gals don't want to be just another statistic to your unfeeling boyfriends, you better learn to defend your base.  You better enforce traditional Filipino parental batas and Bar Access to The Ancient Secret (BATAS)!

If you do, you will be happier (and your parents, especially your tatay, even moreso).

Why?  Because you will own your boys again, turn them into your heroes, and get them to divorce DOTA for good.  And if you want to, maybe you can even get them to play sungka with you again.

*The Filipino's daughter, who's turning 6 this year, is only going to be allowed to have a BF at age 2130.

Got a question for The Filipino?  Email him now at askthepinoy@gmail.com.
Posted by The Filipino at 1:25 PM

If you can't beat them, join them! :) I might try this DOTA myself, as I'm found of playing MMORPGs. :P

Ok lang yan, at least alam mo na nasa harap lang sya ng computer at hindi ibang babae ang kasama. Lol!
Instead of becoming jealous with Dota, find a hobby of your own that will occupy your free time and will enrich your well-being. Play console games or scrapbook or get involved in sports, do something productive for yourself, girl! :)

As a teenager, he must also enjoy his youth.You just have to understand... You might as well join him if you could learn DOTA. Swerve your attention on inspiring things rather than getting jealous of JUST an online game. Don't stoop that low. He values your relationship,but you must also keep in mind that his world doesn't revolve on you alone, girl. ;-)

Besides, that issue on online games over you is just a challenge for your relationship to overcome.Cheers! ;-)

LOL! I agree, funny thing though is I don't think the young girls or women of today get it. Put some value in yourself, maybe you'll be better appreciated. Don't be too easy girls. Filipinas have a bad reputation already in the international realm, let's not give them the satisfaction.

I’m no doctor but I don’t get why internet addiction could be in the same criteria as gaming? I thought for some people, internet is a way of life — like online shopping, internet banking, etc.

Yet, I visited an internet cafe inside the neighborhood, just a few meters from the vilage church. It was 8:00 PM and the internet cafe brimmed with high school and even grade school students playing some kind of war game, possibly Defense of the Ancients (DOTA) , an expanded version of Warcraft. I was horrified to see these kids. Shouldn’t they be studying?

Wow! I play dota when I was in college. Yes, sometimes I prefer dota than to be with my gf. It is not good to be with your gf all the time. I need time to be with my friends. Life needs to be balance.

Hire a band of online gamer "assassins" to kick his ass. That should bring him back to reality.