Guess who is this week's "Good Mexican of the Week"?


Hey, have you read The Mexican's latest column in New York's The Village Voice, Kansas' The Pitch, or Salt Lake's City Weekly, et cetera, yet?
Ecstatic for you,
MuQ

Yes, of course!  Ever since I learned about The Mexican's column, I've read it every week.  And every week, I also wonder how I can be as colorful, caustically witty, exciting and funny as my idol!  But you know, MuQ, I've long realized there's no way I can be like him -- the guy is just a genius at what he does!

And if you've forgotten, loyal readers of this blog will remind you that "Ask a Filipino!" got started because I was inspired by the men behind "Ask a Korean!" and "¡Ask a Mexican!", the "original."  But unlike The Korean and I who, aside from being lawyers, both blog anonymously, The Mexican is actually not anonymous.  In fact, not only is he not anonymous, he is quite famous.  His name is Gustavo Arellano, a syndicated professional columnist, who was featured in The New York Times in 2007 for unleashing "a torrent of criticism and attention, not to mention questions" about anything Mexican.


According to Wikipedia, Gustavo's column "now appears in 37 newspapers across the [United States] and has a weekly circulation of over 2 million."  Gustavo has also "won numerous awards for the column, including the 2006 and 2008 Best Non-Political Column in a large-circulation weekly from the Association of Alternative Newsweeklies, the 2007 Presidents Award from the Los Angeles Press Club and an Impacto Award from the National Hispanic Media Coalition, and a 2008 Latino Spirit award from the California Latino Legislative Caucus." 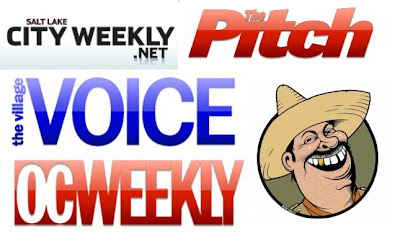 Every week, after answering a couple of questions from his readers, The Mexican has a section dedicated to praising the "Good Mexican(s) of the Week."  Well, as you've probably read, a week after I declared Ricardo Reyes (the Mexican "Pop-a-Shot King" who Philippine media mistook for a Fil-Am) as "Honorary Filipino" on this blog for beating NBA superstars at their game, my idol gave this blog his seal of approval and called me the "Good Mexican of the Week."  How cool is that!?!

GOOD MEXICAN OF THE WEEK
Is actually a Filipino, but we all know that those chinitos are the Mexicans of Asia (consult page 248 of my libro for further details). "Ask a Filipino" answers questions about his raza, from why the armpits of those little island people are so dark to why Filipinas are beautiful but Filipinos ugly, in an informative, hilarious, scandalous manner. Good read, and Mexican-approved! Read more Pinoy pendejadas at askthepinoy.blogspot.com.

So to The Mexican my idol, if you're reading this: Muchos gracias!  Maraming salamat!  And if we bump into each other one of these days, the lumpia is on me!
Got a question for The Filipino?  Email him now at askthepinoy@gmail.com.
Posted by The Filipino at 5:33 AM

The Mexican (via email) said...

My pleasure! Keep it up, and hopefully you get some readers out of it!

Since the Filipinas was really ruled by the Viceroyalty of Mexico (it was Mexico's Legaspi who really began "Spanish" colonization of the islands) for most of Spanish rule, it only makes sense that The Filipino is the "Good Mexican of the Week".

It was surprising, Pnoy and his administration is trying their best to get investment to the country with tourism, PPP program etc...but they are or refused to support or change the 1987 Constitution written by a priest Fr. Bernas. I cannot tell you how much lives were lost from our "kababayans" who are forced to work overseas as an OFW like domestic helpers, forced to carry drugs to another country with a fee! Recent incident in China in which executed 3 Filipinos and probably more on the way. It could also potentially create an international conflict....Its starting already.
This Stupid provision SHOULD AND MUST be abolish for our country's sake. I would also dream of being a parliament government.
MANILA, Philippines - Navy authorities on Thursday vowed to seek long jail terms for six Chinese caught poaching fish and sea turtles, as part of a crackdown against foreigners stealing marine wildlife.
Anger towards China has risen in the Philippines after the execution of the three Filipino drug couriers.