Who is Dr. Gerard Francisco and why does he deserve a PhilStar "News Feature"?

Ah, it's you again!  But what's up with this Old English crap?  Will you please knock it off?  It doesn't quite ring well coming from you, you know?

But thank you for coming up with your questions for me!  Perfect timing as usual!  (Makes me wonder how I would have written this blogpost if I hadn't invented you.)

Of course, I remember that offensive line from Teri Hatcher's character in that Desperate Housewives episode which ran September 30, 2007.  In it, she was about to see a doctor and then she remarked:

"Okay, before we go any further, can I check those diplomas? ‘Cause I would just like to make sure they are not from some med. school in the Philippines.”

Naturally, it stung and offended doctors who went to Philippine medical schools.  But not only doctors, MuQ -- also other Filipinos like me who got their degrees from the Philippines (my bachelor's degree was from there).  We felt the slur was really another swipe to lessen our accomplishments, our value.  Even though it was just a joke, we thought there was going to be something sinister afoot if it were not corrected -- a subliminal message which would feed more distrust and bigotry and condesc--

MuQ: Yeah, but weren't you and the doctors being too oversensitive?

Will you please not interrupt me, MuQ?

As I was saying, it was very condescending and insulting.  And the incident hit me personally because I was reminded of my study groupmate and good friend in law school -- a white dude -- who was so surprised when he found out that I topped our midterm exam in Contract Law.

"Of all people," he honestly told me, "you were the last person I would have predicted to do it."

"Please don't get upset, but it's because your first language is not English and, well, you graduated from the Philippines," he said.

That's why I got involved, MuQ, in protesting against the Teri Hatcher remark, even though I stayed in the background. I helped organize a demonstration in front of the Disney Store in San Francisco and I also helped research the law and other issues surrounding the incident to make sure the more prominent individuals who were leading the charge against the network which ran the show, ABC, were armed with data and information for better argumentation.  In the end, I'm thankful ABC backed down, apologized and cut out the offensive line.  Now --

MuQ: Wait a minute -- I think the title of your blogpost is a bit off.

I'm getting there, MuQ, but STOP interrupting!

Okay, here's why I really wanted to write this blogpost: The Philippine media loves a sensational story, a feel-good story, a story which their constituencies -- i.e., their readers/viewers -- would find some affinity with.  And that's all perfectly understandable.  What I lament though is the fact that in the pursuit of these types of stories, they sometimes do away with journalism standards that can get in the way.

The story of Ricardo Reyes is a good example of this.  Recently, the Philippine Star, along with other media outlets, featured the busboy who beat NBA stars in "Jimmy Kimmel Live!'s Pop-a-Shot Challenge."  In and of itself, Ricardo's story is great.

In fact, for Philippine Star, the story of Ricardo merited not just an ordinary news article but a "News Feature" [EDIT 1/27/2011: I originally thought the "Breaking News" heading applied to the article as well, but upon closer inspection, I now think the heading actually refers to the ticker of fresh news pieces]: 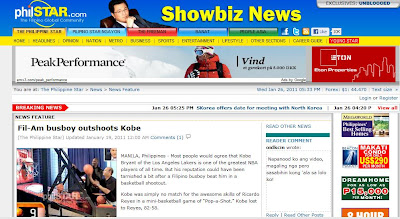 I saw the YouTube clips and I thought Ricardo's English accent was not really Filipino-sounding, so I dug deeper, and because there's not a lot of information online about him, I even contacted his manager.  In the course of my research, I found out that the guy actually immigrated from Mexico City!

I then left a comment in the comments section of this specific PhilStar article to inform the newspaper management and its readers of this mistake, but someone deleted my comment.  This left me wondering: Is there someone suppressing the truth about a story as petty as this?  For what reason?

Now, if PhilStar and Philippine media in general really want to do a good job for its readers and/or viewers, they could have applied the standard they applied to Ricardo Reyes -- Filipino name? Check; Filipino look? Check -- and they would have had a nice story on their hands about US Congresswoman Gabrielle Giffords' new doctor, Dr. Gerard Francisco, MD, who is leading the team of doctors who are helping her during her rehabilitation from the effects of the horrific shooting which shocked America.  And with minimal research, they could have had a feature article that looks something like this: 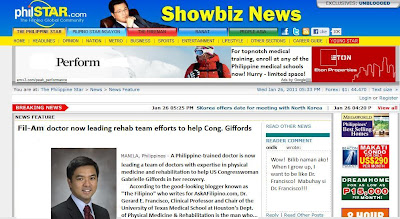 But because I have not seen ONE feature article from any Philippine news media about Dr. Francisco, let me suggest just a few of the angles they can explore:

(1) How about the Teri Hatcher angle?  Because Dr. Francisco is not just Filipino but actually received his medical degree from the University of the Philippines, the fact that he's the Chief Medical Officer of TIRR Memorial Hermann rehab facility at Houston's Texas Medical Center and also the Department Chair of The University of Texas Medical School at Houston's Department of Physical Medicine & Rehabilitation is worth writing about, I think.

(2) How about the scholarship angle?  According to his 39-page CV, Dr. Francisco has received awards for Teaching Excellence, has been adjudged one of Castle Connelly's Best Doctors in America for several years, and has published tons of articles in his field of expertise -- these are also worth writing about, if only to impress upon the doubters and haters out there the quality of Filipino scholarship.

(3) How about the angle exploring Filipinos' outsized representation in the US medical field?  According to a study published by the American Medical Association, there are 20,861 practicing physicians in the US who obtained their medical degree from the Philippines, translating to 8.7% of all US doctors.  This is remarkable considering Filipinos just comprise about 1.5% of total US population. (Makes you wonder what the numbers are if you include Philippine-trained nurses, physical therapists and medical technicians, right?)  A journalist writing about Dr. Francisco using this cangle can even explore the related "brain drain" effect caused by these medical-trained Filipinos who studied in public schools in the Philippines but decided to move to the US for one reason or another, and maybe look at ways to incentivize them to be dual nationals not only on paper but also in terms of active Philippine societal engagement.

(4) Lastly, how about the Manny Pacquiao angle?  The Philippine media, the government, businesses, and everyone it seems, put out all the stops to share in the glory of Pacquiao, leading to exponential growth in interest in the sport of boxing among the impoverished young.  But as a nation, is the Philippines best served encouraging these impressionable kids to take up gloves as their way to wealth and greatness?  Why can't the country, its government and the establishment, even for just a tenth of how Pacquiao was glorified, honor people like Dr. Francisco, or my friend, who I will not name here because I do not have his permission, who got his Ph.D. in Bio-Informatics in the US and yet went back to the Philippines to follow through on his promise to go back and teach in his province?

If someone from the Philippine media will just exert some effort to write about Dr. Francisco, I'm sure many Filipinos will find that Dr. Francisco's story is truly inspirational. And if the country is to succeed, I think the media really has to do a better job at finding stories that inspire -- with vetted facts to support them, if I may add.

Got a question for The Filipino?  Email him now at askthepinoy@gmail.com.
Posted by The Filipino at 3:34 AM

Well said. Unfortunately the forces u speak of are all short sighted, shallow & too dull to follow such inspirational story such as u suggested.
(Dull might be too harsh of a comment for some, but i'm just calling it as i see it.)