I just want to say that I am really enjoying reading some of your posts and most of the time I am laughing my ass off.  But are you really friends with Gretchen Barreto?  Dannnnggg!

Keep up your good work, my friend!

Now, the topic of your question -- i.e., my friendship with famous Philippine actress Gretchen Barretto -- is a profound and complicated one.  So in order to answer it, I first broke it down into its logical components: whether we can be friends, whether she's qualified to be my friend, whether we chose to be friends, and whether we can remain friends.

Then, I sought the wise counsel of the learned from across the globe and throughout human history.  I looked at the "rules" they have laid down on the issue and I "applied" it to myself vis-a-vis my friendship with Gretchen -- the friendship which you now question.

So let's look at these rules one by one.

First Rule: The wise and great Chinese philosopher Confucius (551-479 BC) advised us:

"Have no friends not equal to yourself."

Application of the Rule:  According to my mother, I'm really, really good-looking.  People, of course, say Gretchen is very, very beautiful.  In my book, my mother's opinion on this issue carries the same weight as all others.'  So I guess, it's fair to say that Gretchen is my equal, right?  In other words, she can be my friend.

Second Rule: For his part, the American poet, essayist and leading figure of the Transcendentalist movement, Ralph Waldo Emerson (1803-1882), opined:

"A friend may well be reckoned the masterpiece of Nature." 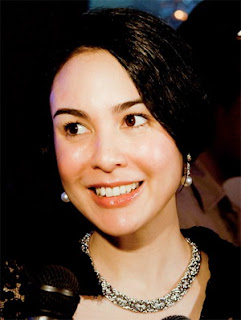 Application of the Rule: With Gretchen, I reckon we can take the Emersonian advice literally, don't you think?  I mean, hey, she's Nature's beautiful creation, right?  If so, then she  qualifies to be my friend.

"Fate chooses your relations, you choose your friends."

Application of the Rule: Now, I think this mandate is the hidden genius behind the idea of Facebook which the founder, Mark Zuckerberg, who is single and is only 26, has impressively figured out early on in his life.  I mean, it's really brilliant because what Delille is saying is this: I may have no say who gets to be my mother-in-law, but I get to choose who I want as my friends.  I chose Gretchen so I requested to be her friend on Facebook; irresistibly drawn to my online charm, she accepted.  Ergo: we're friends because we chose to be friends.

"Friendship is love without his wings."

Application of the Rule:  Like Aristotle before him, Lord Byron was really comparing friendship with romantic love when he said that.  And what he really meant is this: That while friendship is usually between people of the same sex, a friendly relationship between a man and a woman is also fine. However, if one party has unrequited sexual feelings towards the other, it can cause the withdrawal of the desired party from the relationship, and friendship will therefore disintegrate because of that.

What this means is that as long as Gretchen does not fall in love or exhibit any sort of carnal desire towards yours truly, we can remain friends; if she does, I'm out.  In other words, the burden really is on her.

Now, admittedly, it's going to be a heavy burden for her to bear, but I'd like to think it's doable.

Got a question for The Filipino?  Email him now at askthepinoy@gmail.com.

Dear Reader: Want to become friends with The Filipino?  Look him up on Facebook where he's known as "Ask ThePinoy," send a Friend Request, and if you're good-looking enough, he might just accept your request.  Mabuhay!  ;-)
Posted by The Filipino at 5:35 PM

@Filipino:
I think you have been punked! You assumed that the person Ray G. is asking about is the actress. Gretchen Barretto the actress is spelled with 2 t's; your FB friend only has 1 t. The birthday of your FB friend is in 1975; the actress' real birthday is in 1970. So I think that someone set up an FB account for Gretchen to make everyone believe that it's hers. So you (and about 4966 others) were tricked!

For all you know, Ray knew the Barreto gal (with 1 t) and/or the real Barretto actress, and he was just testing you. ;-)

If you had only consulted Madame Auring, you might have gotten this answer right!

Nooooo I did not set you up. I didn't even notice the extra T or the missing T until The Filipina brought it up. However, The Filipina is probably right that you might have been set up. Not by me, but someone else that is behind the profile of Gretchen Barretto or Barreto.

Hahaha The Filipino, I am enjoying following your blog. Anyways, @The filipina, I like how you think broadly and check every single aspect to support an argument. I think people should know that a lot fakc celebrities' profile is up on FB, most of these are created by their fans, or webmasters to get more friends for marketing purposes.